These are my very personal views and may not reflect yours. Please do understand that as you proceed. 🙂

Twitter and Facebook was censoring trends/tweets of right wing people for a long time now and there was expected to be fall out from that. That has resulted in a new social network called Gab.ai ? . A social network which vows to not limit free speech. You have to apply to join for now and they allow new sign ups every few days. I had no problem in getting mine in a few days. So let’s dig in, shall we?

How does it look? 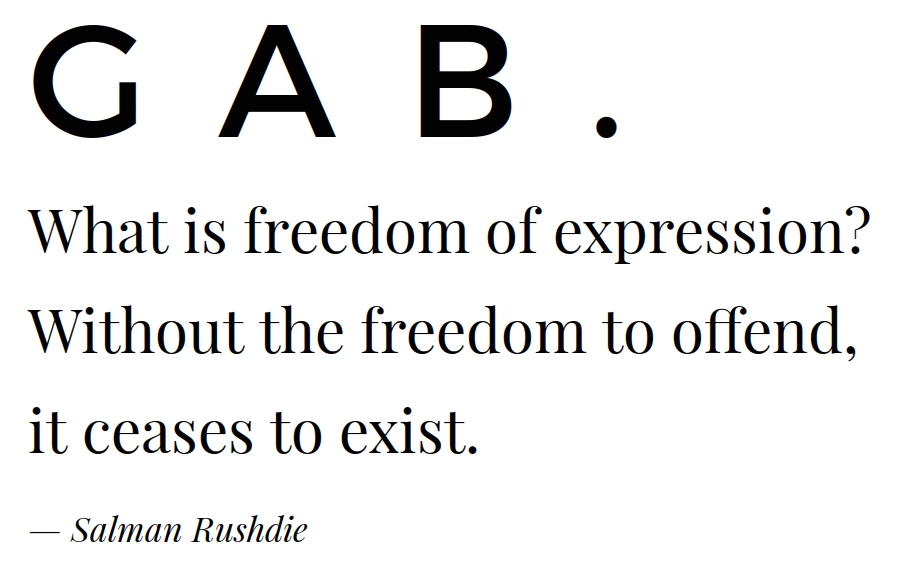 Neat, simple and provocative. This is what an excerpt from Gab.ai’s homepage looks like

There’ll be a link to get yourself in the line for signing up. I’ll iterate my problems with the home page below. For now let’s go right ahead and login. 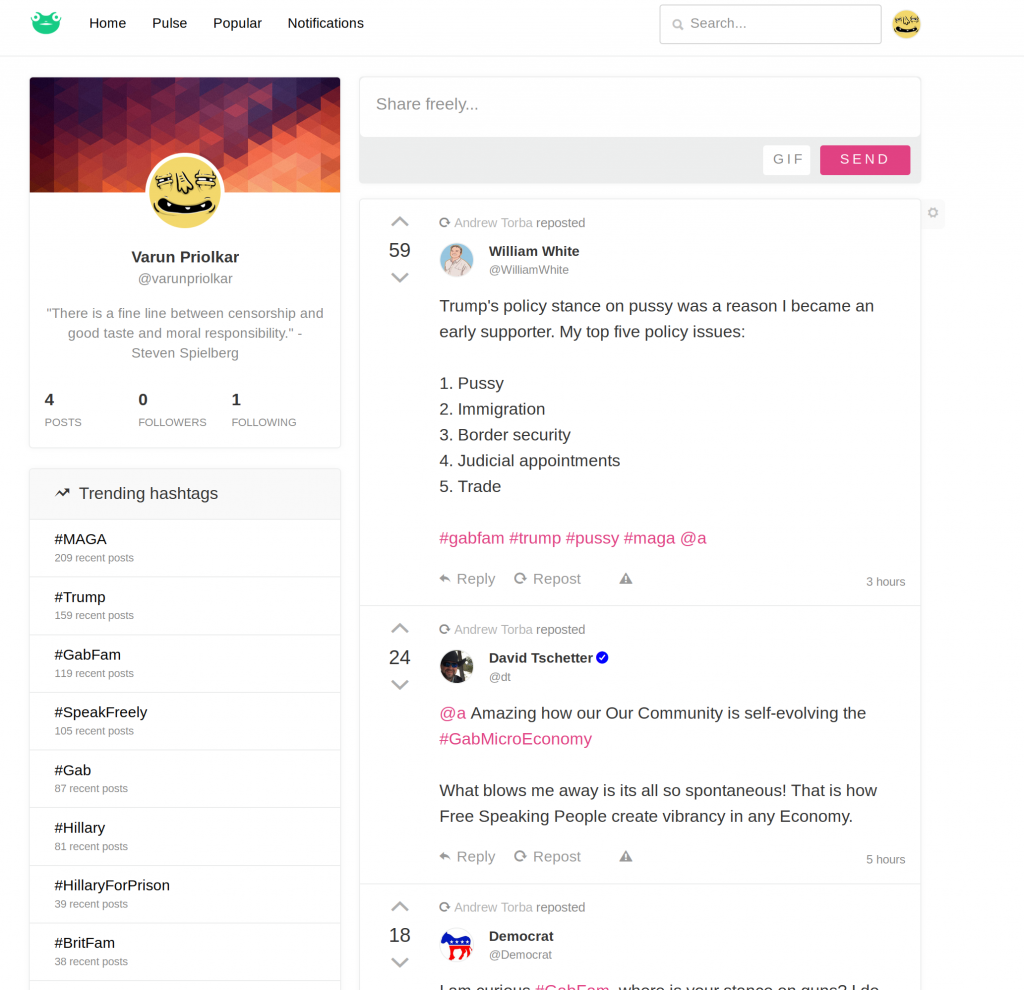 After you login and sign up for the social network, you’ll be greeted with something like this. It looks like something which mimics Twitter’s functionality with Reddit’s upvote/downvote system. You have your trending lists, your follows and all the usual functions like notifications etc. There’s the popular button there as well and you can have a look at things which are popular there. The larger 300 character limit was however very refreshing. Twitter’s 140 character limit is sometimes very limiting. Apart from that there is not much to it really. The only interesting and popular person I’ve found on Gab.ai was Milo Yiannopoulos.

I absolutely hate this. This can potentially turn a website into a right wing Reddit clone. What essentially can happen is that certain thoughts/tweets can be encouraged, while others discouraged. It can become an echo chamber of sorts. Maybe they can come up with something innovative here.

I’m more of a Chan person than a Reddit person so maybe it’s just me. ?

You can easily make out that the website itself doesn’t hold back from expressing it’s founder Andrew Torba’s views, right from the home page to the (in)famous pepe ? as their mascot. I have no problems with the latter since the media has totally misreported the issue but keeping the views of the Gab.ai website non-partisan, while at the same time not trying to manipulate anything to achieve this is something they can look at doing.

I would like a truly non-partisan website which doesn’t echo the viewpoints of it’s founders, opposite of what Twitter has become today so that there is healthy conversation to be had. I have no problems if the audience does this, but the website itself endorsing certain viewpoints makes it hostile for anyone having opposing viewpoints to join the website. I hope Gab.ai keeps that in mind. This comes across as more of a reaction to the hostile take over of free speech by the left, rather than something new. There is absolutely nothing to discuss about, apart from politics.

I would have liked something innovative to be done. A Twitter clone is not enough to draw in people and make them use the website. We have already seen this with 8chan and Voat. People get mad at the way a website is running but refuse to go to an alternative clone.

For now the website runs on a donation only revenue model. 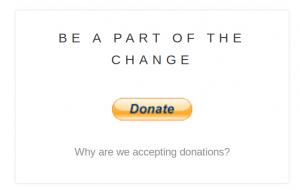 The justification for this seems to be that any potential investors can interfere with the free speech of the website, hence defeating it’s purpose. I can see what they are trying to do here but it is a fact that anything which needs to scale and do something needs money. They will have to think of something here, since similar websites like 4chan have had money problems since a long time due to advertisers not wanting to be associated with the website due to negative media coverage.

However the CEO/Founder of Gab.ai Andrew Torba does claim that they’ve had 10,500 live users during the second presidential debate so that was nice to hear.

A lot of social media’s charm comes from the fact that you can easily integrate the neat functionality with your own things like maybe your blog. I hope they can have a look at integrating Gab.ai with as many things as possible. It would be very neat to have and would give an even more incentive for more people to use it.

An Android/iOS app should help too. Getting notifications on your phone is a massive bonus.

It would have been nice if there was a way to get in touch with the folks running the website with suggestions or questions since it is very early in it’s inception.

I tried doing this over Gab.ai itself but was met with no response. ?

What is it using under the hood?

The images are on a gabfiles.blob.core.windows.net domain, which I assume is some sort of Azure storage. ICMP was disabled on it so there was no way of knowing my latency to it but a traceroute suggests that it was hitting somewhere in the US last with a latency of around 280 ms from Goa, India after moving to Singapore. All traffic was flowing through Microsoft’s network after going through Bharti Airtel. Maybe they should look at moving images to a CDN. There is no way to embed images and GIF embeds are only via Giphy for now. Maybe that will change when the site gets more revenue. Or maybe they can have a look at Imgur’s API for image uploads.

A quick look from the Wappalyzer plugin tells us what the website is using. The website is using Cloudflare and does have IPv6 enabled. There is no way to know where the actual server is located since Cloudflare is kind of a reverse proxy. I do however get mixed content errors for s2.reutersmedia.net, static.theglobeandmail.ca, 16004-presscdn-0-50.pagely.netdna-cdn.com, imgur.com, i.imgur.com and i4.mirror.co.uk. So maybe they should look at forcing HTTPS.

So will I be using it?

I’ll be doing the waiting and watching game for now. Sure I’ll be giving it a visit every now and then but there is absolutely nothing to talk about on it than Trump’s presidential bid. Maybe things calm down in a few months and there’ll be more things to talk about and more interesting people using it.

The website does look very nice and modern though so a big kudos to the Gab.ai team for that.

So what are you waiting for? Go signup now! This is my Gab.ai profile. 😀

I got to spend a little more time with Gab.ai after this review and I am very much impressed with their reaction. Andrew acknowledged my review and retweeted me, even when it very quite critical of it.

They do infact have a support channel on Gab.ai named @support, although that is not quite clear for a new user. A design refresh in plans for the future and I noticed Andrew encouraging people of opposing viewpoints to be on Gab.ai, which was very nice to see.

iOS app is expected to be released next week, while an Android app is in the works too. Neat stuff.

I think they have addressed most of my qualms. It is very refreshing for a social network to actually listen to their users and be pro-free speech. After having used it for a while, Gab.ai does indeed feel quite nice. I certainly will be using it more and I do wish their team best of luck for the future!

4 thoughts on “Trying out a new social network! – Gab.ai”