This post is constantly updated with whatever information I can get my hands on. Refresh for updates.

World wide panic!!! Google is down! Grab your routers and run!!!11

Well not really but internet services were massively affected due to the Cyclone Vardah near Chennai.

I am going to talk about the first one.

Google down you say?

Well I was alerted by this post by my friend and unusually slow internet.

So let’s explore what went wrong. Inspite of having very high packet loss while accessing RIPE’s website, I could manage to get one traceroute through RIPE Atlas project. 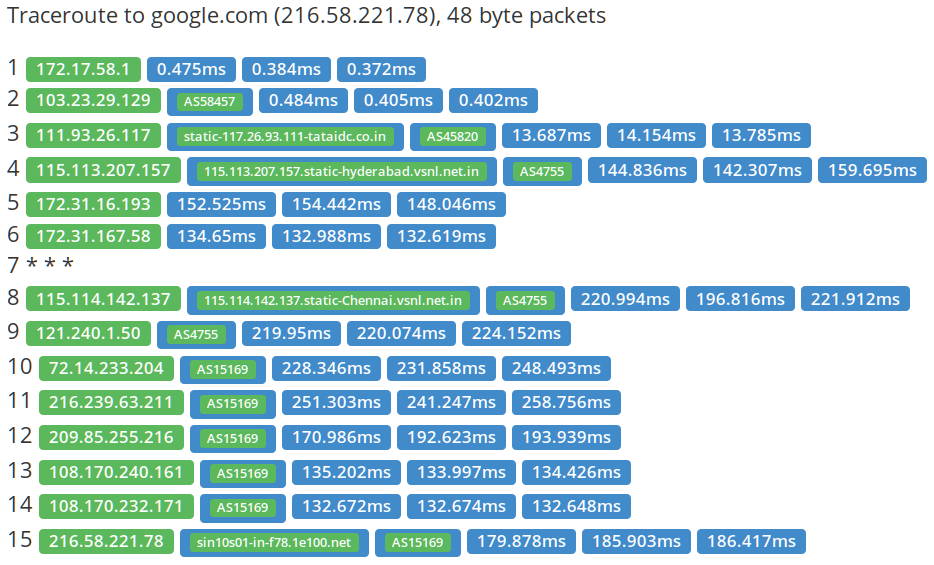 Trace from AS58457, Hyderabad to google.com at around 7 PM

As you can see traffic destined for Chennai is terminated at Singapore, possibly carried there by Google itself cold potato style. Likewise I noticed that I was hitting Delhi rather than Mumbai. So traffic was just moved away from Mumbai to other locations. Likely reason for this would be connectivity issues between Mumbai and Chennai possibly due to fiber cuts. I elaborated on this a bit more at AirSenegalInternational.com if you would like to read up on it.

I continued to monitor the situation some time later. Link to test: https://atlas.ripe.net/measurements/6959487/#!probes 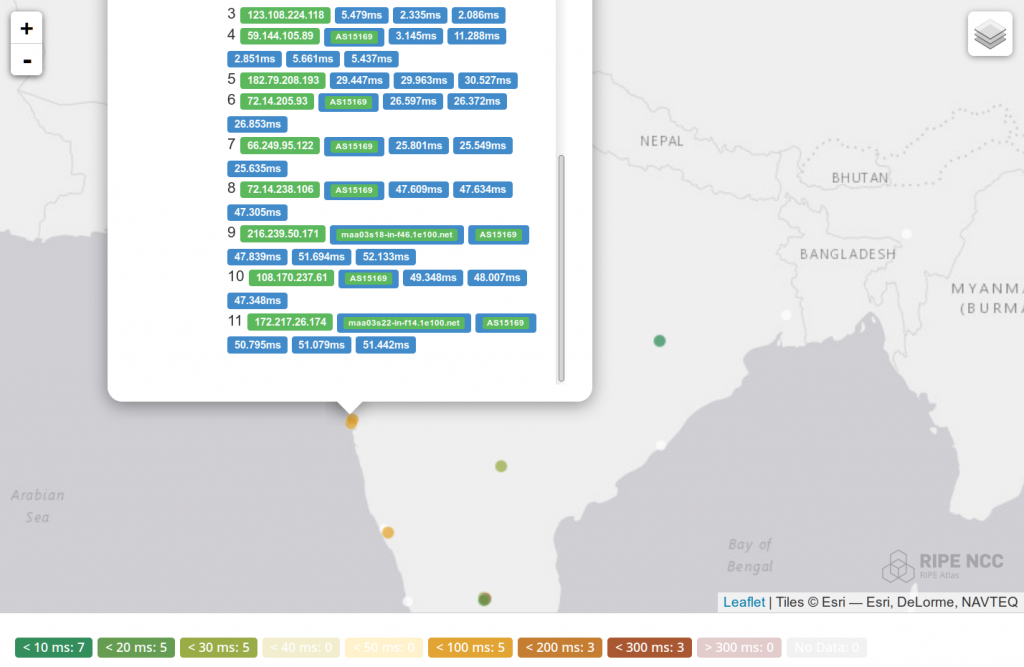 Trace to google.com from probes in India at around 1 AM

As you can clearly see even probes close to Mumbai were hitting Chennai instead of their POP closest to their region. Let’s test out the aspmx.l.google.com domain used for Google Apps which isn’t terminated in India. Link to test: https://atlas.ripe.net/measurements/6960037/#!probes 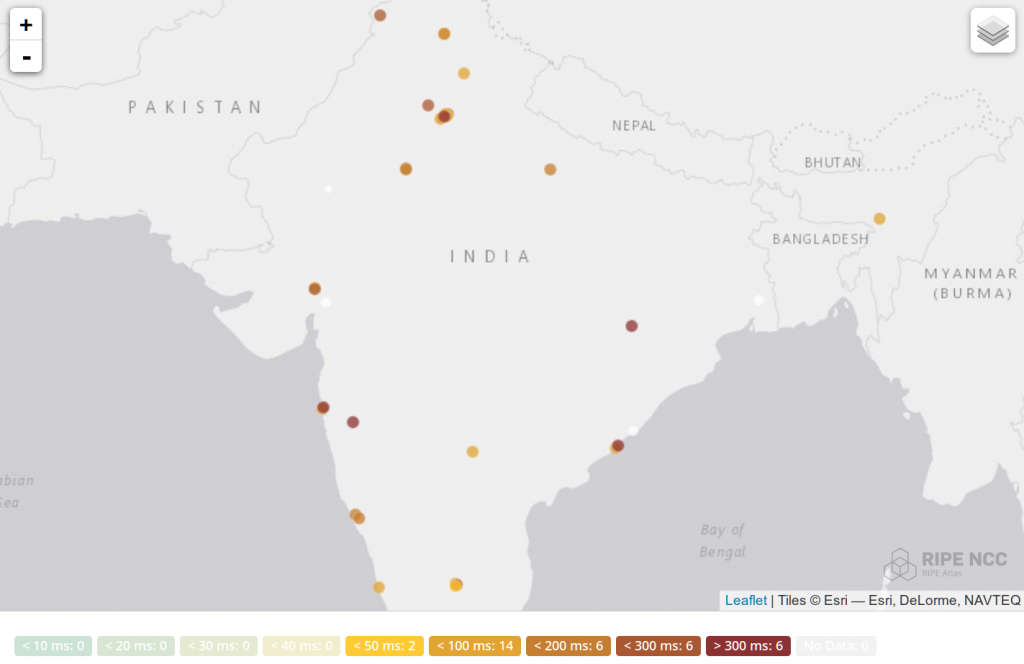 Trace to aspmx.l.google.com from probes in India at around 1 AM

As you can see the latencies are not good. Also my friend alerted to me a few strange traces like this.

What is happening here is that Google was rerouting traffic constantly and BGP routers were taking a while to respond.

So what exactly happened? 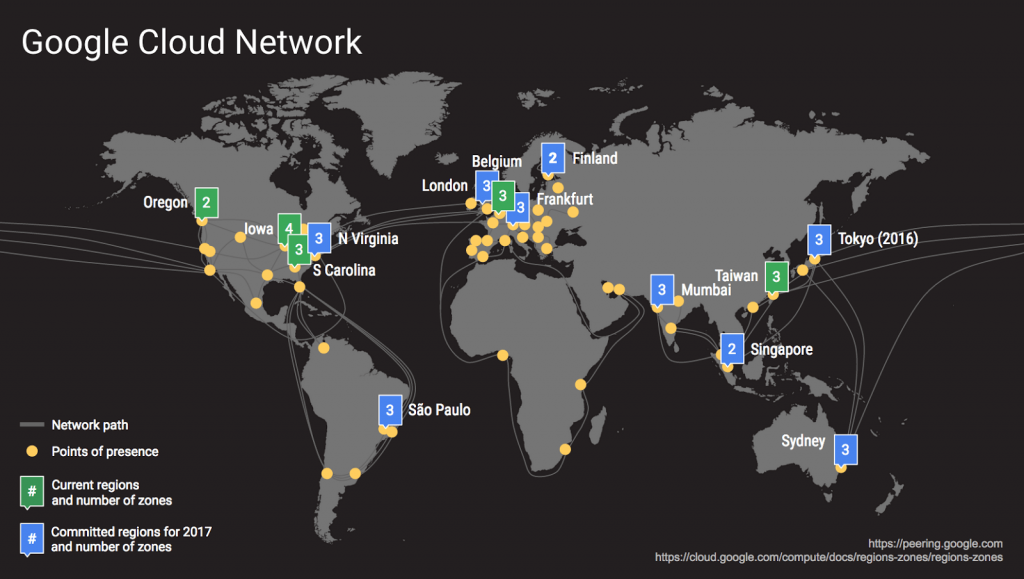 Google has a huge network. They can’t possibly be down, can they?

There is not much Google content actually in India right now. Most of it is either cached by Google itself, while terminating SSL on one of their Indian nodes – Mumbai, Chennai or Delhi. Eyeball networks/ISPs then either directly peer with Google or their upstreams do. Most YouTube content is just cached by GGC nodes inside ISP networks.

Google has limited capacity to Europe through Mumbai and most of Indian traffic is actually served from Taiwan via Singapore through a fat pipe in Chennai.

Moving traffic between sites is normally not a problem but this caused two major problems:

So what happened was that Google wasn’t actually down. The connectivity from ISPs to Google was hampered because they didn’t have enough transit capacity if the plug was pulled on their peering capacity.

Likely solutions would be to avoid this in the future would be: 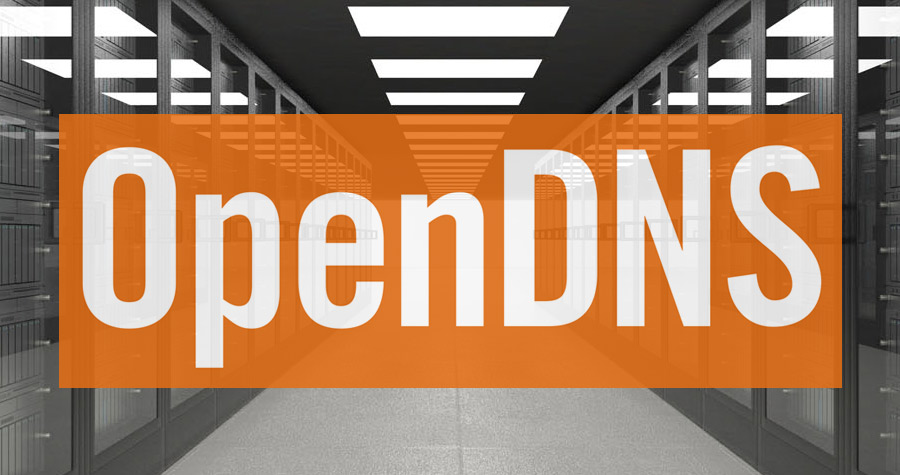 Also what I did was move from Google’s public DNS resolvers to OpenDNS because Google makes their queries from outside India and they are just cached at their POPs here so non-cached queries could have issues. That plus the fact that they use anycast and could hit a node like Mumbai would cause issues. Non-Google services were much better for me after I made the switch.

As I finish this post, I have noticed that connectivity is much better, atleast with my ISP(AS58405) so time to go watch some YouTube streams! 😀

I have some information that tells me that Google had interconnects from Powergrid(AS132215) that had issues. While connectivity by Powergrid was restored by morning, i2i cable leased by Google possibly has some issues as well and I am seeing a lot of Google traffic taking international route after my ISP’s upstream hands it off outside India. ping google.com is hitting South Carolina, after Airtel(AS9498) hands it off in London.

A friend confirmed that Airtel’s i2i cable indeed has issues.

Dear Customer, the cyclone in Chennai has impacted one of our undersea network cables which may affect your internet speeds. We deeply regret the inconvenience. Our engineers are working to resolve the issue and services will be normalized shortly.Airtel

Trace to Singapore was also going through LINX, London for me.

I did an another RIPE Atlas test. Link here: https://atlas.ripe.net/measurements/6960503/#!probes 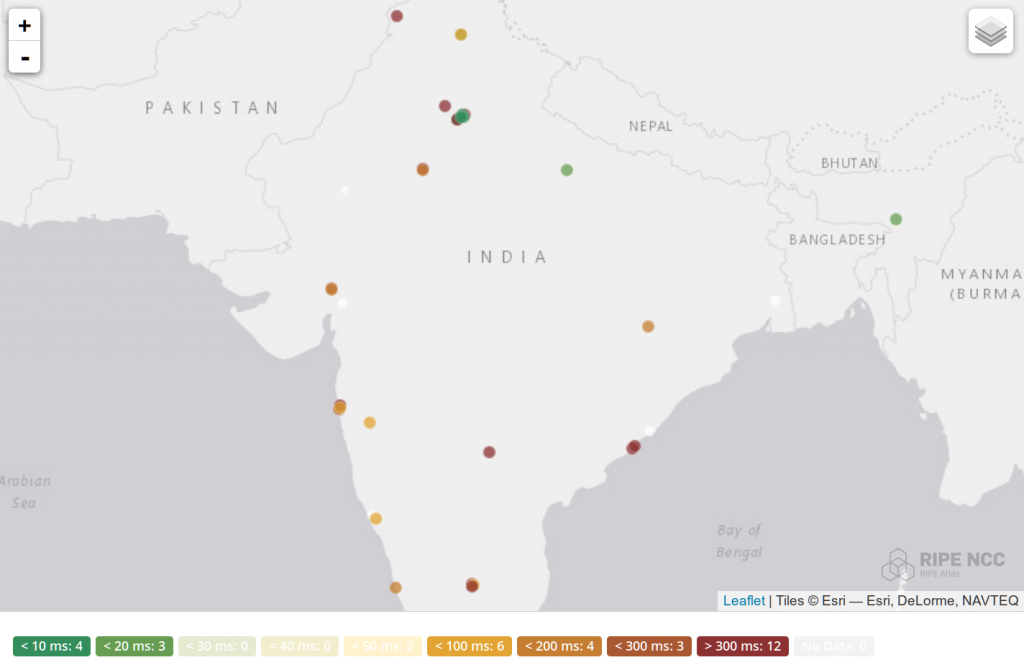 Trace to google.com from probes in India at around 5:30 PM

As you can see, the map shows a very bleak picture, with most of the traffic going outside the country. Let’s look at the OpenIPMap to see where most of the traces are landing up. 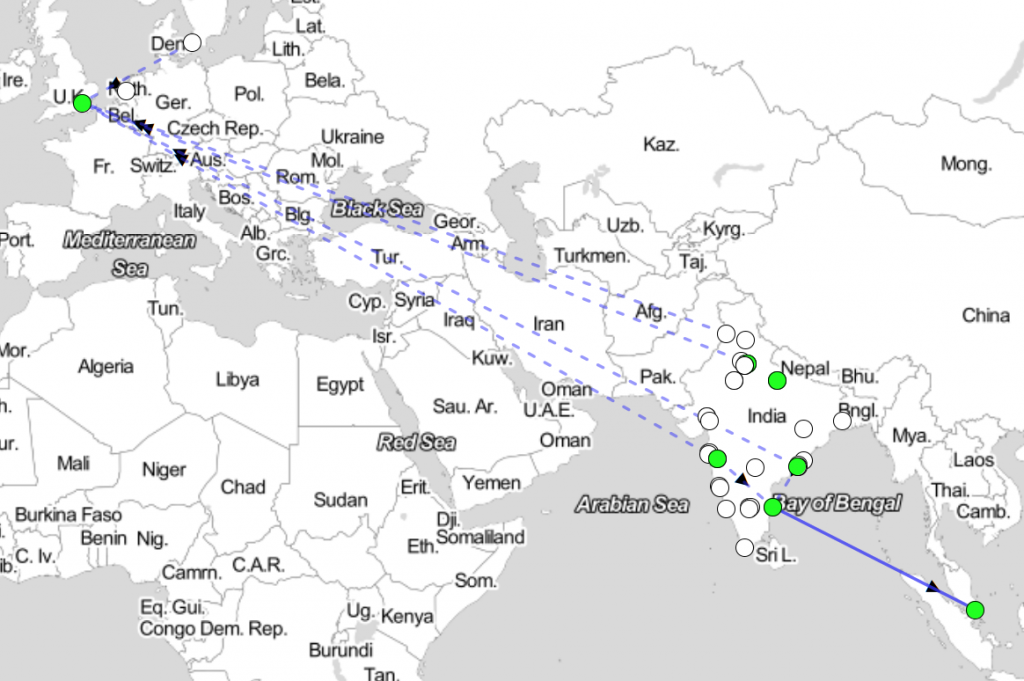 OpenIPMap for trace to google.com from probes in India at around 5:30 PM

As you can see very little traffic is going to Singapore directly via Chennai. This possibly means there is a problem with the i2i cable connecting India to Singapore. Google likely carries whatever traffic lands up in Europe to other places since it’s a cold potato network. It doesn’t prefer to carry it from India itself since the Europe-India pipe that they have isn’t very high capacity to carry all that traffic.

Traffic is back to hitting the Indian nodes. RIPE Atlas test here: https://atlas.ripe.net/measurements/6960735/#probes 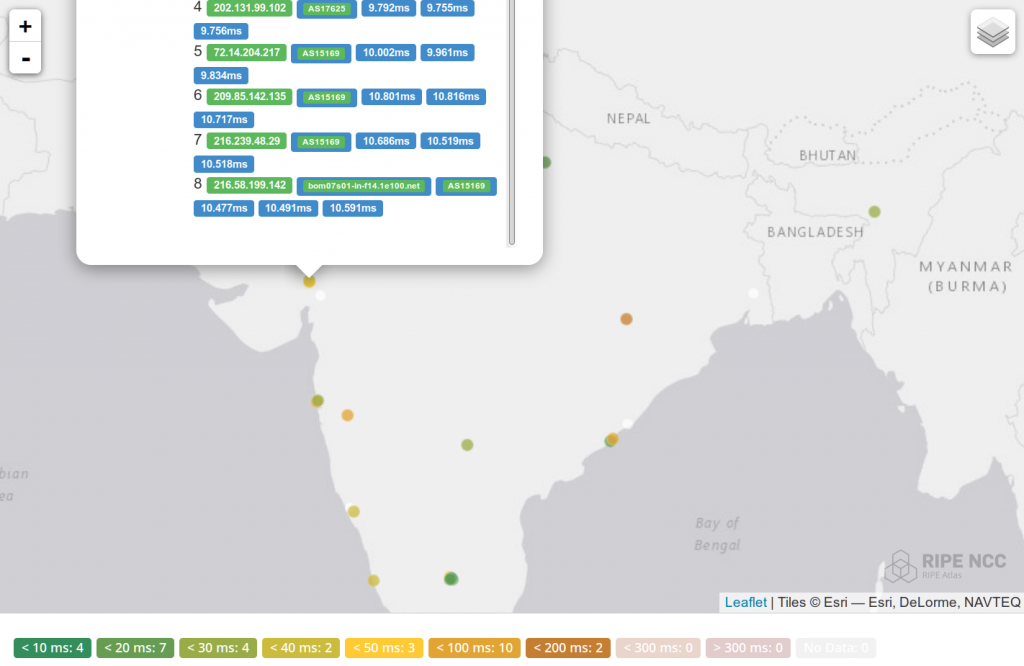 Trace to google.com from probes in India at around 9:30 PM

As you can see traffic is hitting even the Mumbai node. I don’t know how these nodes are fed with content as it looks like the i2i cable system still has issues.

Tracerouting to Singapore the traffic all flows through London. For reverse path, I used HostSG(AS24482)’s looking glass.

As you can see NTT(AS2914) is carrying the traffic to UK, before handing it off to Flagtel(AS15412). Most probably Indian telecos have stopped announcements of Indian routes on Singapore routers and are preferring routes learnt from their European routers.

Google services should be better but we’ll have to wait and watch about how the i2i problem plays out. Networks not using the i2i cable should be much better off, as far as connectivity to Singapore is concerned.

i2i cable issues are still not fixed. Airtel is using SE-ME-WE4 to get to Singapore instead of i2i but the Singapore to India capacity is probably not as much as required so they are sharing fewer Indian routes in Singapore. You can observe a lot of traffic going via Europe to India. The forward path from India to Singapore is fine, probably because there is very less traffic from India to Singapore so little choking in general. My ISP uses Reliance communications(AS18101) for return(heavily prepends announcements to Airtel) so I am much better off.

Tata Communications Ltd. has issues with TIC cable as well. This is what they sent to their customers.

You may observe additional latency of 30 -230ms for US West Coast and APAC prefix.

Please be informed that, this is due to under-sea cable fault on TIC submarine cable system. The fault is located in the wet segment in between repeater R58 & R59, this is near Singapore CLS, around 85-95 KMs from CLS.

As per latest update, the TIC cable fault repair is tentatively scheduled from 8th February 2017 and permit process is in progress. Additionally during repair operation Repeater R52 replacement will be carried out. The tentative ETR for the repair completion is 19th February 2017 depending on weather conditions.Tata Communications Ltd.

Fixing i2i and TIC cables could take a few more months, before which latency to Singapore could be affected. Fixing submarine cables is a long process. You need good planning, permits, allocating resources, sending diving teams etc. So we’ll have to be patient.

I have talked about this to my friend from the USA. He told me that usually there are no problems like this in the USA. If he has some minor issues with computer he just contacts PC Revive (more at pcrevive.org/areas-we-serve/computer-repair-boynton-beach-fl/) and that’s it.

36 thoughts on “Google outage due to Cyclone Vardah in India”